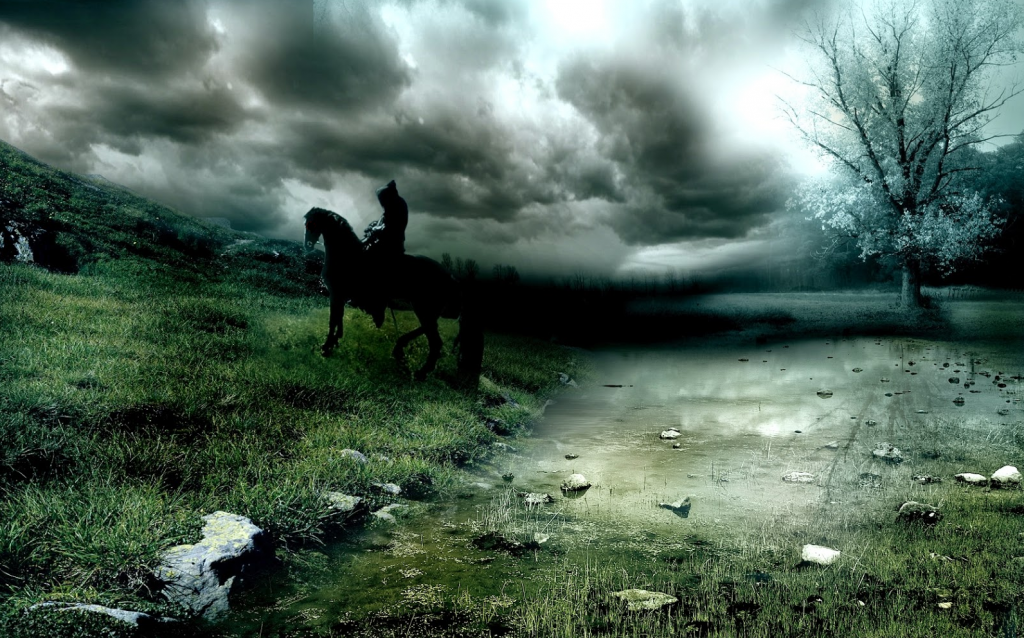 They said he was tall, tall as a mountain. His eyes shone bright as burning coals, they whispered, and his horse’s hooves sent sparks flying whenever it struck the ground. They told stories, of the faceless knight and his black horse, and of how they were four once. Now only the one remained, roaming the land. No one knew what drove him, nor what his destination was. Yet all accounts agree on one thing – he never took off his helmet.

My mother met him, once – and no, it ain’t what you may think. She told me the story many times, when I was a wee lad. I knew it backwards before I was old enough to piss straight. Good ol’ da was sick of hearing it before too long. There ain’t denying a toddler his stories of knights though, y’know how it is.

She and the other lasses were out in the fields on that day. High season for harvest, ‘twas. The kind of long day when you’re up and running ere break of dawn and don’t get back home until it’s truly dark. Perhaps at noon, when they were all quite exhausted already, there appeared a line of black clouds on the horizon. Not the sort of black any one of us had ever seen, mind you. As if midnight was about to swallow day and planned on digesting for a good long while. You’d be forgiven to think the end of the world was nigh, if you heard me mum tell it. The skies were laced with lightning. The ground trembled with the sound of thunder. I feared it would open and swallow me mum whole, honest-to-goodness.

Now, I don’t remember much of me gran but, as mother would have it, she was there too. The old woman refused to run for cover like the rest of ‘em. Just a few more yards to gather in, she’d say, plenty o’ time before the storm hits, dear. You’ve probably guessed where it leads. The rain was soon upon them all right, but the real inferno was still a heartbeat or two away from breaking loose. Yet gran was one damn block of granite, almost immovable, me mum teary-eyed and desperate by now.

And then, out of that storm rode the knight. Insouciant, like the storm nipping at his horse’s hooves was none of his business. Then again, perhaps it wasn’t, who am I to say…So, here he comes, sitting astride his horse, the horse blacker than midnight. He reined in next to where me mum was dragging gran, leaning down.

“Whereto this road, lass?” he asked mum. She told me he had a deep, booming voice. One you’d remember.

I tell you, he was more effective than mum ever could be – sizing up the knight, clad in black steel head to toe, a giant sword strapped to his back and on top of that monster of a horse, me gran keeled over like a sack of potatoes. Blacked out, she did. Now, mum said she felt no fear (you probably guessed where I inherited that from, right?). She said there was something about the knight. A sadness, it was, what she called it.

“This here road? Nowhere, good ser,” she answered truthfully. And it didn’t, really, just through more fields and rolling hills. The village was a ways off, in a different direction.

“You are a knight, though, aren’t you? You’re dressed like one,” she persisted. Right, you never got off the hook easily with me mum, you didn’t.

He paused, considering a reply. “Armor does not a knight make,” he said at last. He eyed me gran on the ground, then dismounted with a thud. Mum told me he was tall, standing right there next to her. Towered above her like a giant, he did.

“To a woman, all men must be knights,” he said. Leaned down and scooped gran up, he did. Now, understand gran was a somewhat plump woman. Yet, he picked her up without much effort at all, looked like. He placed me unconscious gran on his horse, gently must be said, and mounted up. He then offered a gauntleted hand to me mum.

“Come lass, there’s a storm raging,” he offered. And he was right, it was pouring rain, like the gods just tore a dam down for sport.

She accepted the hand and the knight pulled her up, sat her on the horse in front of him. The beast didn’t budge at all, calmly waiting and strong enough to bear the weight of the three of them.

“What an obvious name to give a black horse,” she mused.

Mum wasn’t done with her questions just yet. She peered up at the knight, squinting hard to find a gap in the visor of his helm. Only shadows stared back at her. Told me it irritated her not to see who she was talking to.

“Why don’t you show your face?” she pried, of course.

Mother rolled her eyes, thoroughly unconvinced. You can picture how menacing that must’ve appeared, coming from a lass of ten summers…

“Not the most gallant of knights, then.” She noticed his grip on the horse tighten some.

“Why’s that?” mum prodded, twisting around to peer at him. She was a handful.

“Nothing good will come out of it, child. Besides, the time is not yet right.”

“Right for what? I’m not afraid, you should know.”

He laughed heartily. “No, you are not, it seems. Still, I cannot remove my helmet just yet.”

“You’re not funny, ser,” mum said petulantly. That was the end of it though.

He did carry both mum and gran home, though, safe and sound. The storm continued to rage all around, yet it seemed they rode in its eye.

They said he was lost. The lost knight, some called him (those who’d never met him, for they’d be saying otherwise). He rode Midnight alone, without companions. Others called him the last horseman. Storms rode in his wake, the likes of which you’ve never seen before. Trouble followed him, they’d add too, battles and wars and whatnot, though mum always rubbished those claims. All he ever had for her was a helping hand. And more questions than answers.

Yet all accounts agreed on one thing. The knight could not take off his helmet.