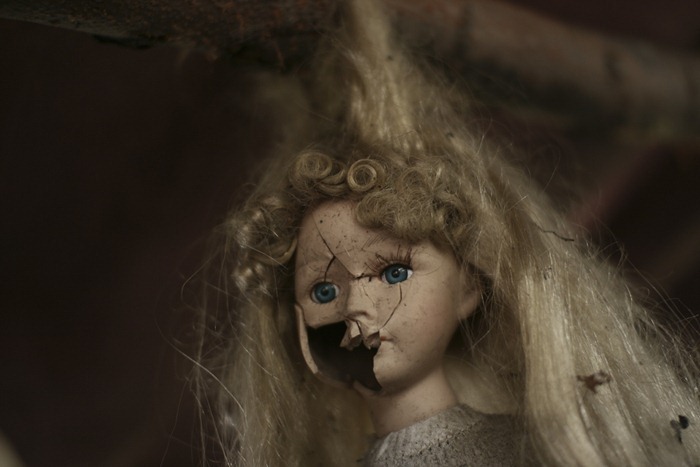 Decay has always been an obsessive fascination of mine. Like an old friend who, whenever I thought he’d run out of stories to tell, would surprise me with one I haven’t heard before. He’s always been there for me, for as long as I remember.

My oldest memories trace back to the ruined houses in my grandparents’ hamlet, where I spent my early summers. I used to skip daintily under the slanting roofs and crumbling walls of abandoned homes, often barefoot (to my mother’s obvious displeasure), the occupants of those houses long departed to whatever fate had been waiting for them.

One such dance drew my first blood, I recall, my skin punctured by a shard of broken pottery. The blood wasn’t much more than a lazy trickle. It stung though. I cried, of course, as four-year-old girls are wont to do. Can’t exactly remember what made me cry more, the pain or the tidy spanking soon forthcoming.

Bizarrely, I can still vividly recall what the shattered piece of amphora depicted – an offering of bread and salt brought before a wizened, old man. His magnificent hair and long beard shone brighter than gold and were still visible, despite color flaking off elsewhere. The image looked old, older than grandma and grandpa put together, I was certain. As certain as a child of four can be with such things, really.

You see, decay always sort of was in the derelict houses, the ruins, in the Asoulum too (although I discovered that place only a few years later). The more broken down and overgrown a place was, the more it spurred my curiosity and a sense of adventure, or mystery-seeking, enveloped me.

They infuriated and fascinated me in equal measure, the dots between two memories, the blank pages where books or mind ceased to be a witness, but only mutely marked the passage of time. That’s why I spent so much time amid the crumbling houses, I think. My tiny mind worked tirelessly to fill the gaps between brick and mortar the elements had hollowed. I scoured attics, kicking around old hay while digging around for ordinary objects. They were invaluable treasures to me – a broken comb, a fractured hand mirror, a straw doll without a head. I imagined the stories of those who lived here, reliving their lives, their laughter and sorrows. Decay, in its inevitability, its rainbow of shades of rust, soot and dirt, conditioned my mind, preparing it for life. Or death, as it were.

I gulped down tales my grandparents told about the olden days. About the wraiths dancing on the fields at noon, forcing the workers to retire from their labor. About the night warden and how he walked the village after dusk, singing a song to mark each passing hour. I pouted when grandma couldn’t remember how the verse went. Grandma, she had stories in droves, well, such as she remembered. I guess decay touched her too, in the end.

There were ruins of an older and altogether mysterious sort on the edges of the village too, overgrown or swallowed by the earth. Not built by men, what grandpa used to say. It was forbidden to venture there. Supposedly it brought ill luck. But go tell a child not to do something and…you know.

I ask you: Why would anyone build a hamlet near such ruins if they were any sort of dangerous? I came to two conclusions on that account, then: Peasant minds are somewhat simple, for good or worse, not always following the logical choice. And two, superstition is yet another layer hiding an ant-hill of tales underneath. I saw as much, as a child. Stories, whether those I listened to or made up on my own, have always fueled my adventures. So, I went and explored to my heart’s content, earning many a spanking along the way. My backside never complained.

Houses in our small village were baked mud and a thatched roof or bricks or stone for a couple of the wealthier families. Sometimes people splattered them with paint so that it looked halfway decent and pleasing to the eye. The ruins were alien however, out of my wildest imagination and yet unlike any child’s dream could conjure. Beyond old. What frustrated me most was decay seemingly hadn’t touched them. They stood, or lay toppled. But if they did, it seemed as though an invisible hand had done the pushing. Covered in brambles or shrubbery, the forest tried to reclaim them, but the stonework was impervious to nicks and fissures. Oh, some of them lay smashed to pieces all right, but those looked like something big had passed by. Like a giant or something.

I visited these stones often. Time was suspended, when I stood in their midst (if such a thing is possible). I didn’t like it. Therein, decay was but a distant memory. I missed my friend dearly and, having coaxed from them what tale stone and marble would share (which wasn’t much), I stopped visiting the ruins altogether. If they held secrets, others, more of the carefree or greedy sort have already picked them clean.

You see, decay had always talked to me, in a voice I too soon grew addicted to. Whenever I didn’t hear it, I grew fearful. There was a certainty to it, a comforting embrace that meant a lot to me as a child whose parents didn’t have much time for it. They often let me to my own devices. Those few friends I had loved to play around parading as queens in distress and knights in shiny armor. I continued to dig in the dirt, crawl in the dust, trying to understand why nature was unopposed in taking back what it gave us.

Of course, try explaining to a child of four a goddess is talking to her. Only my stories and the things broken and dusted I played with mattered then. The world of necromancers was non-existent, back then. The Lady would come calling for me, its innocent and oblivious pupil, only years later.