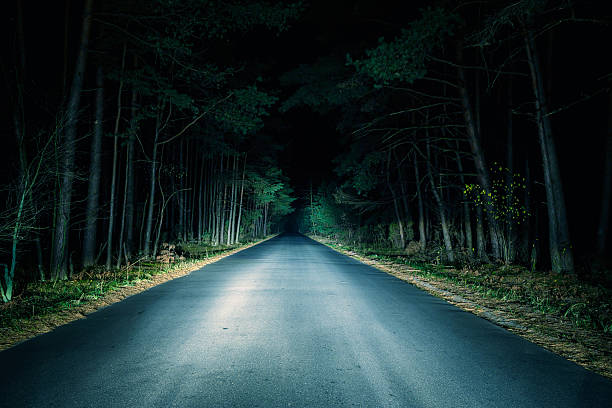 He’s arrived at a dead end. No more light at the end of this road,  where the asphalt forks into gloom and gravel. He squeezes the steering wheel, black-gloved fingers creaking, deliberating his decision for the thousandth time. Tired of the inner dialogues by now. Eager to move on. Lowers the window, the warm spring air spilling inside, mingling with the sweat and the scents of McDonald’s fries and the too much beer he’d had. He sits for a moment, watching the nighttime insects flutter to and fro, drawn to the car’s headlights. He has stopped the engine but left them on. Somehow it’s easier to concentrate with lights on. Also, he’s never been too fond of the dark. Ok, now. Where to go from here?

There’s no turning back. He’s been through this before, okay? Debated it too many times. And why should he turn back anyway? He’s alone. He will die alone. No one left who gives a shit and he gladly reciprocates. He’d severed what ties there remained to friends and family. They all stopped listening to him, although it’s questionable whether they ever listened to his reason in the first place. He has liberated himself, in truth. He draws a deep breath now, his swimming vision solidifying momentarily. That’s gotta be it. He feels free, finally.

Like sheep, people follow what’s on the news, oblivious to the Truth. Few make the effort to educate themselves. Even fewer put in the effort to dig deeper to really understand what’s going on. They are being manipulated and they don’t even realize it. Poor, poor bastards. He feels fortunate, compared to the masses. He’s been able to contain the noise of the voices outside. Separate fact from fiction and oh boy, there’s a lot of the latter going on. Only the voices inside his head remain now and he can handle those. He’s been weaning off the pills over the past few weeks, actually… And that’s another story, big pharma feeding us miracles where all they do is feed on our frailties and addictions. He’s glad he doesn’t need a pastille half the size of his nail to feel better. On most nights.

Tonight is such a night. There’s silence, a man sitting in his car, at the end of his road. A rare moment of lucid thought.

He gets out of the car and steps into the growing night. Never to be seen again.

A lone gunshot reverberates across the valley.